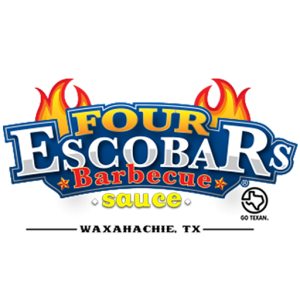 Four Escobars, LLC, was established in September of 2013.

Four Escobars Barbecue Sauce came about as a result of some good, old-fashioned competition.  Cletis, the mastermind behind the sauce, enjoyed participating in competition barbecue cook-offs.  He wanted to have an edge over the competition, and he believed the one thing that could set him apart from all the others would be the perfect homemade barbecue sauce.  And so the journey began.

The Four Escobars recipe blends the perfect amount of paprika, chili powder and crushed red pepper with just the right amount of sweet to create a fantastic barbecue sauce that makes for “A Little Sweet, A Little Heat.”   The taste will grab both sides of your tongue and leave a lasting impression on your palate.

The name Four Escobars represents family.  Each member of the family plays an important role in the development of the products and the success of the business.  Cletis (Dad) is the creator of the sauce; he is the mastermind behind all good recipes in the Escobar household!  Gannon (Oldest Son) is the deciding factor in just how much raspberry goes into the Raspberry Sauce; he gets credit for that “subtle hint” of Raspberry.  Garrison (Youngest Son) is the creative mind “bee-hind” the Honey label.  Look closely at the Honey Sauce to find the bee and note the spelling of bar-bee-cue!  And Michelle (Mom) is the coordinator behind the scenes that keeps all the moving parts running smoothly (as most moms do)!

We’re very proud of our Texas heritage, and our label was designed to reflect that.  Behind our Four Escobars logo you will find a map of Texas with small towns and large cities nicely faded into the background. (Look even closer to find the family names faded into the background, too!)  Four Escobars was created in Waxahachie, Texas, and we have prominently and proudly displayed that below the logo.  We are a Go Texan member, and we display their logo so our customers will know that we are a Texas-owned and -operated business.

Currently there are four flavors of sauce on the market: Original, Honey, Raspberry and Spicy.  All flavors are offered in an 18-ounce glass bottle to accentuate the quality of the sauce.  The Original Sauce is also offered in a gallon size, plastic jug for the retail sector.

Distribution began with an HEB partnership in January of 2015.  By March of 2016, sales were over 100,000 bottles.  HEB has expanded distribution throughout the state of Texas, and now Four Escobars resides in over 230 stores.  In 2016, Four Escobars, LLC, was named HEB Supplier Diversity’s Supplier of the Year.